Tales from Crusader One to Support Veterans

June 13, 2016
Currently, my stories involve the US Military.  It's a huge part of the universe I built, be it the branches of the Army, Navy, or Marines, or even a made up branch like NASA.  I've got protagonists like Ishmael, Pummel, and Justice, and I have antagonists like Jensen and all the spies, traitors, and defectors.  You can see my point here.

There's a reason we say that those in the military serve (or have served).  Presently, the US Military is an all-volunteer force, which means that people like me (and quite possibly you) never have to enlist.  Others have taken the burden to fight in wars, battles, combats, and skirmishes while I can sit here comfortably and type this on my phone.  This is in stark contrast to conscription, or a draft based way, to fill the ranks of the military (though this is what Vietnam Vets had to deal with, among other hardships like disrespectful protesters).

I grew up seeing soldiers return home.  I witnessed the Walter Reed Hospital scandal unfold.  I've heard the issues and problems of soldiers coming home from Iraq or Afghanistan with physical or mental disabilities.  Not to mention this is ongoing, not just "something that happened a few years ago."  While some disabilities or handicaps people can overcome, those are few and far between.  People need treatment, and that's not cheap.  And as those who have family or friends and have to try to deal with the VA, they know it ain't easy, either (but that's another issue).

My father is a veteran.  My uncle is a veteran.  My cousin and his wife both served.  My great-grandfather fought in one of the world wars.  My ancestors fought in the Civil War and the War for Independence.  Having service members in my family means a lot to me.  I admire them.  I respect them for their service.  And they were all volunteers (not quite sure about the pre-1950s, though).

I can't imagine the struggles if someone like my dad or sister were injured in combat.  And, frankly, while there are physical scars from combat, there are invisible, mental ones as well.  This is why I am donating 25% of my profits from the first week of the release* of Tales from Crusader One to the Wounded Warrior Project.

If you don't know, WWP provides a wonderful blend of serving those that return from combat areas.  They help those with training and job searches, physical and mental assistance, and a wide array of networks.  I love supporting charities.  As a general rule, charities are the most effective at helping the disenfranchised.  This is especially important for the charities who care about the lives of those around us (coworkers, neighbors, family).  I firmly believe that we have the duty to help, serve, and love others.

There's no coincidence that I am releasing my book at the start of 4th of July weekend.  The symbols of justice, freedom, and equality ring loud and true.  We take pause to remember everything that America was, currently stands for, and has the potential to be.  Be mindful of those around us that have sacrificed so much for what we can take for granted, and thank a veteran or active duty member today.

Books for Writers: Techniques of the Selling Writer

September 10, 2016
This is a must read if you have never studied fiction.  While the text is dry (it was written many decades ago and serves as a textbook in many creative fiction courses), it is invaluable. Firstly, it lays out fiction wonderfully.  Swain has a treasure trove of do's and don'ts lined up in all areas, be it character, setting, or the middle of the story. Be prepared to highlight.  I never ever ever mark in my books.  Ever.  It's the 8th Deadly Sin.  But still I found myself thinking "Hey I need to mark this."  This is great for indie authors who are just setting out or those who are experienced and want to improve their craft.  I find myself referencing it even when I'm not writing. I literally (sorry for word choice, but it's true) cannot go into how much value this book is on your bookshelf.  It's almost entirely made up of information, as opposed to other books that promise that simply retell their experiences and market it as "expe
Read more 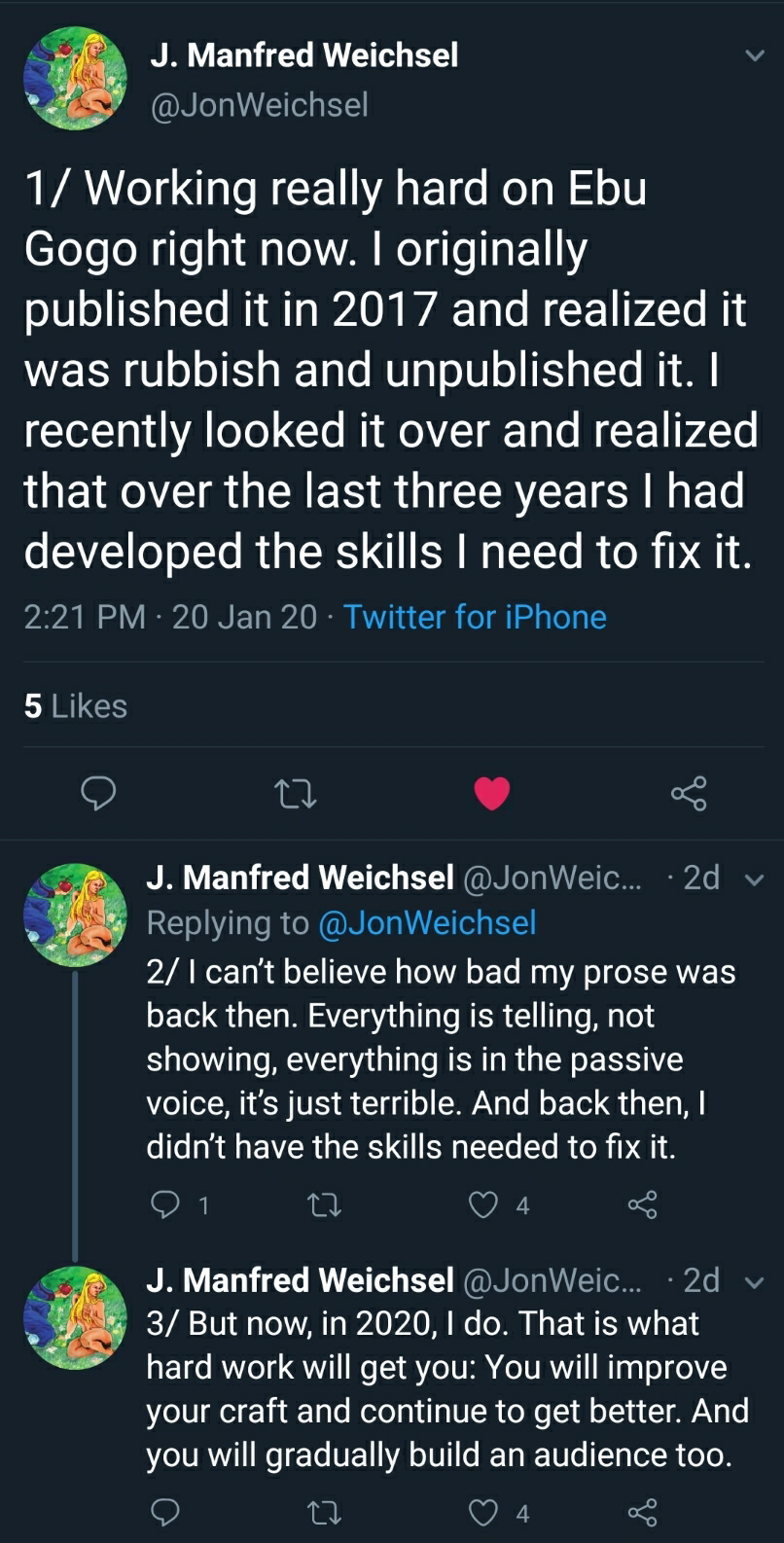 This past week I unpublished the three books in my Civil Tribulation Series. I had been wrestling with this idea for a few months and ultimately decided to pull the trigger. I realized this was the right thing to do, in part, for all the reasons  Expedition to Eden  author J. Manfred Weichsel said: I wrote most of these books when I was an undergraduate. This was before my first fiction sale, before I studied craft or prose or became an avid reader. My marketing was nonexistent for these books and I bet if you follow me on Twitter , you didn't even know I had self published three books. Collateral Damage changed everything. I'm currently working through the edits to this project. It will be the best thing I've written so far. And my biggest fear was that a reader would love Collateral Damage , pick up one from the  Civil Tribulation Series, and be disappointed with the product. With all that being said, I fully stand behind the story in the Civil
Read more